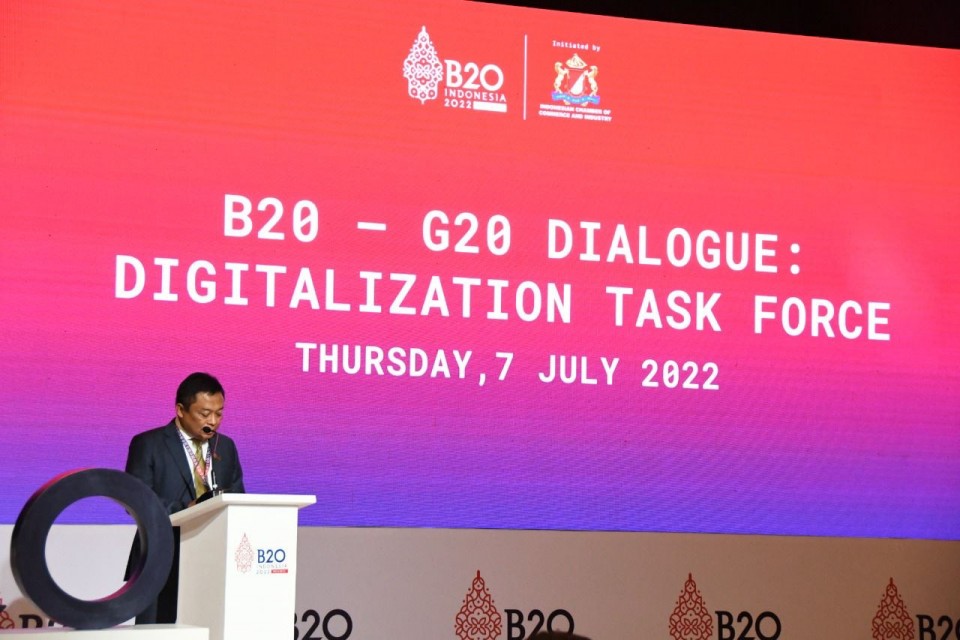 Conducted in a hybrid form, the meeting explored several recommendations prepared by the B20 Indonesia Digitalization Task Force through a series of panel discussions attended by global business leaders.

In his keynote speech, minister Johnny G. Plate expressed his appreciation for the steps and recommendations proposed by the B20 Digitalization Task Force in the B20-G20 Dialogue.

The minister said the digital economy would become more prominent in global markets as the world gradually digitized.

"Even though we have enormous economic potential, there are challenges ahead of us that we must also face together, of course, with public-private collaboration. One of them is the digital divide, especially in developing countries," he said.

Johnny said the government had been greatly assisted by the discussions and recommendations of the B20 Digitalization Task Force, which were in line with the central vision of the Indonesian G20 Presidency to create an inclusive, empowering and sustainable digital ecosystem.

In line with insights from the communications and information minister, Arsjad said the world had changed as a result of technological disruption.

Approximately 52 percent of companies had gone bankrupt or had been acquired as they had been unable to keep up with the pace of digitalization, he said.

Arsjad claimed that in Indonesia, the same issue occurred not only in large companies but also in micro, small and medium enterprises (MSMEs), which have forever acted as the backbone of the Indonesian economy.

There are 64.2 million MSMEs in the country, which contribute 61 percent of the GDP, or more than Rp 8.5 trillion, and provide employment for 97 percent of the Indonesian workforce.

"The COVID-19 pandemic paralyzed almost 80-90 percent of MSMEs, especially during public activity restrictions [PPKM]. But on the other hand, this pandemic has been a blessing for some MSMEs, especially those that have successfully transitioned to e-commerce or adopted digital sales," said Arsjad.

According to a 2021 Bank Indonesia survey, 20 percent of Indonesian MSMEs mitigated the impact of the pandemic by digitizing their businesses and successfully using online marketing. Hence, said Arsjad, through digitalization, Indonesia could achieve economic growth of up to US$150 billion by 2025 while potentially adding 20 million net jobs by 2030.

For these goals to come to fruition, Arsjad highlighted the issue of the digital infrastructure gap between regions and between cities and rural areas. The second challenge was the lack of digital skills in the country, which would result in a shortage of 9 million skilled workers in the digital technology sector.

Arsjad noted that KADIN had launched several initiatives to empower, educate and accelerate digital literacy for businesses and MSMEs through the WikiWirausaha platform and the Vocational Task Force to address these challenges. The Vocational Task Force aids the government in transforming the national vocational education curriculum to implement digital skills relevant to future industries.

"We invite the business community to take part in investing in the development of digital infrastructure and connectivity across the country, to support and provide input on the revitalization of national vocational programs to make them more digital and to provide internships in their industries," said Arsjad.

Meanwhile, in her opening speech, B20 Indonesia chair Shinta Kamdani said the B20-G20 dialog had been designed as a platform for public and business collaboration to convey concerns and propose solutions.

Shinta expected the dialogue to produce something concrete.

"I am very optimistic that our policy recommendations will bring tremendous contributions to society in the future. Throughout the process, the preparation of these policy recommendations was full of debates and conflicting arguments, which were able to encourage a diversity of thoughts and aspirations from more than twenty countries with different circumstances and capabilities," she said.

Shinta said the policy recommendations submitted to the G20 leaders would be crucial to achieving significant improvements in the digital era. The proposed recommendations touch on essential Indonesian values: universality, sustainability, resilience, inclusivity and scientific methods.

Furthermore, Shinta said the B20 Wiki platform for MSMEs was intended to become part of the global supply chain.

At the same time, the One Global Women Empowerment (OGWE) platform combines existing capacities and networks to accelerate efforts to empower women entrepreneurs and women in the workforce globally.

"In the spirit of strengthening relationships between the business communities of G20 member countries and around the world, we created B20 Connect to facilitate network interactions and explore new business opportunities through trade and investment matching," Shinta said, adding that B20 Indonesia sought to provide real progress and benefits to encourage digitalization through cooperation and partnerships with the government and other stakeholders.

Ririek Adriansyah, B20 Digitalization Task Force chair, announced that the task force he led was focused on discussing efforts to overcome the digital divide.

Ririek explained that the digital divide referred to the growing gap between those who enjoyed the inclusion of the digital economy and ecosystem and those outside the digital world.

In light of this, he said, the B20 Digitalization Task Force aimed to ensure that digitalization could drive future growth and bridge the digital divide, resulting in an inclusive digital transformation.

Moreover, Ririek continued, the government was said to be ready to support digital inclusiveness to support one of the goals of the G20. The B20 Digitalization Task Force Chair confirmed the submission of four recommendations.

"First, [we] encourage universal connectivity [through] universal access to the digital economy and government services to ensure inclusion and eliminate the digital divide," said Ririek.

Second, he said, was the promotion of breakthroughs for a sustainable and resilient digital economy aimed at accelerating digital infrastructure development. Third was ensuring a digital-ready mindset for individuals and MSMEs and enabling MSMEs to have access to digital platforms. The final recommendation was the promotion and implementation of technical security standards that established practices to support companies' efforts to protect networks.

Addressing the results of the B20 Digitalization Task Force recommendations, G20 Indonesia Digital Economy Working Group chair Mira Tayyiba said the government, especially the Indonesian G20 Presidency, had been greatly assisted by collaboration with the business world and industry. Both contributed to ensuring socially beneficial public policies, including digital policies.

"We believe that this collaboration will enable the government to set fair and practical policies and create a better policy space in the digital sector. The G20 Indonesia Digital Economy Working Group encourages cooperation among innovation actors such as start-ups, venture capital [firms], corporations and governments to support digital innovation," he said. 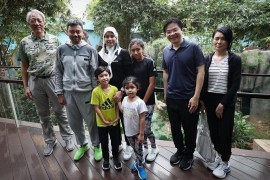 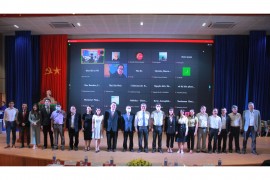